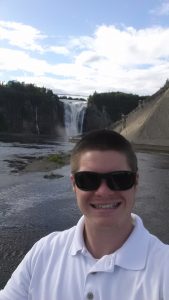 Dan is originally from Woodbury, MN. He received his B.A. in chemistry from the University of Minnesota, Morris in 2013 where he performed undergraduate research under the guidance of Prof. Ted Pappenfus. He earned his PhD in 2018 under the direction of Prof. Mike Pluth working on barbiturates and modified Hamilton receptors for supramolecular catalysis, sensing, and materials applications. His research interests include supramolecular chemistry, physical organic chemistry, and polymer chemistry. When he is not in the lab, Dan likes to camp, hike, fish, and generally be outdoors. He also likes to play tabletop games including D&D.

As of summer 2019, Dan is headed to work for Cascade Chemistry in Oregon as a synthetic chemist.